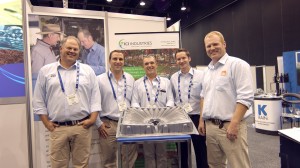 This month saw Tal-Ya trays formally introduced into the Australian market at the Irrigation Australia Conference and Exhibition. The trays dramatically accelerate tree growth, save over 50% water and provide organic week control. They were exhibited by Tal-Ya’s partner in Australia and New Zealand, irrigation company Irribiz of the ICI Group.

Tal-Ya’s tray won 3rd place in the Best New Product category against stiff competition.  According to Brendon Black of Irribiz, “The trays generated a lot of interest at the event, and we got a lot of leads we’ll be following up on in the coming weeks.”

This major event sees the entire irrigation industry together at the largest event of its kind in the Asia Pacific region. The conference and exhibition brings suppliers, equipment manufacturers, researchers, water supply organisations, advisers, government officials and policy makers from across the rural and urban irrigation industries.

The conference theme “Water for Life, Future for All” looks to the future of irrigation covering such issues as Sustainable Water Resources for Agriculture, Climate and Cloud based Irrigation Scheduling and Control, alternative Sources of Water for Urban irrigation, Micro Irrigation, Water Regulation and Water Management & Efficiency, Industry Standards and Codes of Practice, Training and Certification – analyzing the impact of issues on both rural and urban communities.