During the first three months of the year, 173 Israeli startup and high-tech companies raised a whopping $1.09 billion, a 9 percent increase over the first quarter of 2015, in which 162 companies raised roughly $1 billion, according to a report released by Israeli research firm IVC Research Center and Israeli accounting firm KPMG Somekh Chaikin.

As reported in NoCamels;

However, it is still 9 percent below the record high $1.2 billion invested in 201 companies in the fourth quarter of 2015. According to IVC, “fourth quarters typically exhibit the highest amounts in capital raising.”

According to Koby Simana, CEO of IVC Research Center, despite the slowdown reported in high-tech capital raising and venture capital investments in the US, and despite “various forecasts published lately regarding the industry in Israel, the results of the first quarter of 2016 indicate stability.”

He estimates that the following quarters “will determine if the slowdown trend, which began in the US, will take hold in Israel as well, or perhaps the fact that the Israeli market didn’t experience the same peak as Silicon Valley and China in the past years indicates lower local volatility overall.”

The average investment is on the rise

However, 96 venture capital-backed deals amounted to $744 million in the first quarter this year, a 19 percent plunge from the $915 million raised in 108 deals in the fourth quarter last year, and a 12 percent decrease compared to the first quarter of 2015.

“Investors are still in the game”

According to Ofer Sela, partner in KPMG Somekh Chaikin’s technology group, “there is fear that the global technology market is about to shrink. Nevertheless, given the amount of available cash and attractive companies which have their pull – as can be seen from the total volume of investments this quarter – it seems that the industry is far from a crisis, although some shrinkage is expected in the near future.”

Software companies raised 33 percent of the total capital in the first quarter of 2016, followed by the life sciences sector, which accounted for 30 percent of the capital invested in Israeli startups.

Partly responsible for the high investments in the first quarter of 2016 were Israeli cyber-security startups Skybox and ForeScout, which raised $96 million and $76 million, respectively. Says Sela: “The industry is hard at work and the investors are still in the game.” 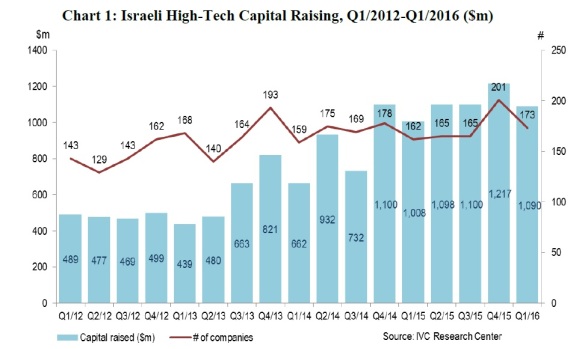