Israeli startup Imagindairy, Ltd. is jumping into the no-cow-milk space, saying its precision fermentation technology is able to create milk proteins that are just like the real thing – but without using animals.

The startup said its technology recreates nature-identical, animal-free versions of whey and casein proteins that can be used to produce dairy duplicates. The non-dairy products have the flavor, texture and the nutritional value of products that are animal-based. This opens up the opportunity of developing a full range of non-dairy products that mimic dairy versions yet contain no cholesterol and are lactose-free, the company said. Leaving animals out of the process also lowers the burden dairy livestock place on the environment.

Precision fermentation is a technology that enables the programming of micro-organisms to produce complex organic molecules such as proteins, explained Eyal Afergan, the co-founder and CEO of Imagindairy, in a text message. “One of the biggest advantages of this technology is its scalability.”

The fermentation process has been used in the food industry for the last 40 years, he said. The most-used enzyme in the dairy industry — rennet, which helps curdle the casein in milk — is produced though precision fermentation, he noted. 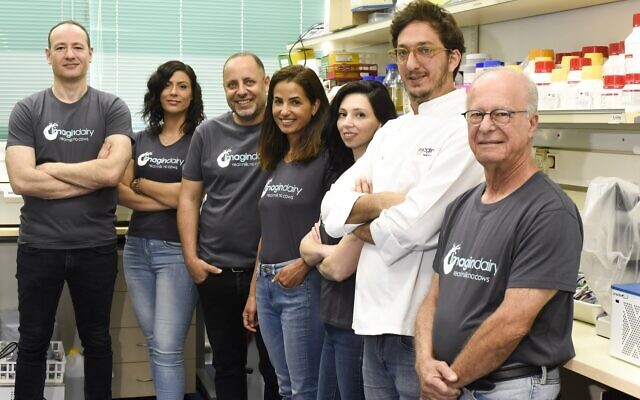 he vision, he said, is to “deliver an animal-free version of the primary dairy proteins — whey and casein — that can allow product makers to match real dairy products in terms of protein concentration, nutrient profile, and the full sensory experiences of the animal-derived versions.”

Imagindairy was co-founded in April 2020, building its first applications in the home kitchen of one its employees, a single parent who needed a solution that would allow her to work on development while tending her homeschooled children during the coronavirus pandemic.

The startup is made up of a multidisciplinary team of experts in microbiology, computational systems, and biotechnology with the support of Israel-based The Kitchen FoodTech hub. Co-founder Arie Abo is a specialist in protein biochemistry, and the technology is based on 15 years of research led by Tamir Tuller, Imagindairy co-founder and a professor at Tel Aviv University.

Afergan said that the startup is the only one in the no-cow milk space with technology that yields, in a cost-effective manner, the significant amounts of proteins necessary for commercialization.

“Imagindairy is the only company in our domain with the required technology to successfully address the industry bottleneck of high production cost,” he said.

The product is still under development, he added. The firm hopes to launch its product, a powder or a liquid that can be used by food and dairy manufacturers and be integrated into existing dairy food production facilities, in 2023, he said.

“We developed an advanced protein production platform that allows us to optimize every step in creating milk proteins,” notes Tuller, Imagindairy’s co-founder and CSO. “This allowed us to achieve the yield that is needed to achieve commercial production.”

The startup has raised $1.5 million in seed funding, led by The Kitchen FoodTech hub, with contributions from the Israeli Innovative Authority, CPT Capital, New Crop Capital, and Entrée Capital. The firm will soon start raising funds for a series A round, the company said.

The market for dairy alternative or plant milk beverages made from soy, almond, coconut, oats and hemp is projected to grow from $21.4 billion in 2020 to $36.7 billion by 2025, according to research firm MarketsandMarkets.

According to a World Wildlife Fund report, demand for dairy products continues to rise due to the global population growth, rising incomes, urbanization and the westernization of diets in Asian giants such as China and India. This increases the pressure on natural resources, including soil and water.

There are some 270 million cows that produce milk along with greenhouse gas emissions that add to climate change. Furthermore, dairy farming and feed production can lead to the loss of ecologically important areas such as wetlands, forests and prairies. Global estimates say that to produce one liter of milk, a massive 1,020 liters of water are needed.

Imagindairy is not the only company operating in this space: Israeli startup ReMilk says it has developed milk proteins that are chemically identical to those in cow-produced milk and dairy products.

Germany’s Legendairy Foods also uses microbial fermentation to produce the same proteins that are found in cow’s milk, and Belgium’s Those Vegan Cowboys says it makes products with the taste of cows’ milk but without the use of animals.

Israel’s Bio Milk, on the other hand, isolates the milk-producing cells in cows’ udders and transfers them to a bioreactor, where they are exposed to materials patented by the firm to produce milk.